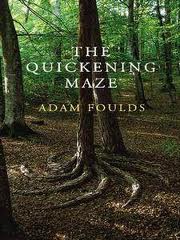 Today I finished Adam Foulds’s The Quickening Maze, a novel I gave the time that it richly deserved. To name drop unashamedly, Foulds was my tutor at a recent Guardian Masterclass and I remember him explaining how he always knew he would have to do something with the knowledge he had gleaned in his youth about how the ‘Northamptonshire peasant poet’, John Clare, and the future poet and peer, Alfred Tennyson, had in the 1840s probably not met at a fashionable, if not progressive, lunatic asylum, High Beach, backing on to Epping Forest (which is where Foulds grew up). Then mentally ill, Clare would in time go thoroughly mad. Tennyson’s brother, Septimus, was also a patient at High Beach, an establishment run by a Victorian scoundrel, the Reverend Matthew Allen, MD, who managed to squander the Tennysons’ inheritance in a get-rich-quick wood carving scheme. Foulds tells the tale of how Clare made a – temporarily successful – bid for freedom. To do so, he has to get inside the head not just of a poet (which I suppose should be a little less difficult for somebody who is himself a poet) but of a man losing his sanity. He achieves this brilliantly, avoiding the beartrap of writing a prose poem but nevertheless writing in poetic prose rich in metaphor and observation. At times a pugilistic boxer John, at times Lord Byron, Clare is at his most touching when Foulds paints him as a sort of noble savage, in communion with nature and the gypsies who live in the woods. It is Foulds’s great literary achievement to make us believe in this steadily disintegrating figure and sympathise with him.