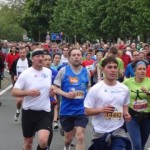 I have run the Brussels 20 k every year now since 2008 but this year I was afraid I wouldn’t make it. I got a bad back – the curse of middle-aged joggers – in the US last summer and only started running again about a month ago. Still, I planned a rapid build-up and managed to keep to my programme, getting up to 10 k last Saturday and again on Sunday. I would, I told myself, be happy to get around. In the event, the weather was cool this morning and I somehow managed to start off in a fairly rapid field, getting to the 10 k mark in 53 minutes. The twin problems, as all regular runners know, are the traffic jams on the Boulevard de Souverain and the killer hill of the Avenue de Tervuren 3 kilometres from the finish. Still, when the official time of 1 h 54 was posted I found it a little difficult to believe. That sounds like boasting (and, of course, it is boasting) but this ‘victory’ was much sweeter than the other four. All athletes plagued with injury wonder whether they’ll make it back and when I crossed the finishing line I felt more than a little elated. It has been a long slog back to fitness, but I have made it – for the time-being, at least! And, as usual, the atmosphere was great. Well done, Brussels, and well done everybody else who competed in or completed the run.