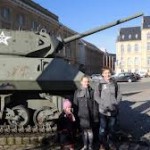 To Arlon this evening for a vernissage. Although it had a mainly Luxemburgish population, Arlon was not absorbed into the new Duchy of Luxembourg but, rather, became the capital city of the Belgian Luxembourg region. As such, it became primarily Francophone, although many of the local place names have retained their original Germanic resonance. The Sherman tank monument parked in front of the town hall recalls Arlon’s fate as a frontier town during the two World Wars but also during the earlier interminable struggles between the Dutch, the Spanish and the French. Whatever its geopolitical circumstances, nowdays many of Arlon’s inhabitants drive across the frontier to jobs in Luxembourg. The vernissage, of the work of a young local illustrator and designer, Alexis Vandersmissen, was a great success.