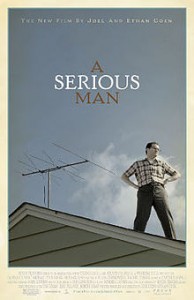 This evening we watched a curiosity, the Coen brothers’ A Serious Man (2009). Set in 1960s Minneapolis (which is where the brothers grew up), the film (described as a ‘dark comedy’) documents the unravelling life of Job-like figure Larry Goprik, as he struggles with an unfaithful wife, a free-riding, hypochondriac brother, a growing adolescent son (with his own problems), unhelpful rabbis, money-grabbing divorce lawyers and the vagaries of life in general. The opening scene, set in a Polish shtetl in the early 1900s, suggests that Larry might be jinxed but, no, the brothers later denied this. Life can just be like that and, indeed, it frequently is. Joel was quoted as saying ‘It’s always fun, and to be quite honest we’ve been doing this for 25 years, heaping shit on characters.’ Certainly, as the film ends, more is about to hit the can. Poor Larry. Poor us!