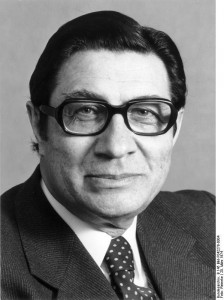 Like London buses, bad news tends to bunch together. This afternoon I also learnt about the death of Werner Maihofer, who passed away on 6 October. When I arrived at the European University Institute in 1981, its founding President, Max Kohnstamm, was just leaving and his successor, Werner Maihofer, was just arriving. Both were great figures in different ways. An Olympic speed-skater in his youth, Maihofer became a leading FDP intellectual in the early 1970s and took over from Hans-Dietrich Genscher as German Minister of the Interior in 1974. These were the days of the Red Army Faction and, as a leading liberal thinker, Maihofer found himself in the ironic position of reluctantly imposing a series of restrictive measures on civil liberties. In 1978 he got caught up in a phone-tapping scandal and, taking it on the chin, resigned and returned to his university chair in Bielefeld. In 1981 he was appointed President of the EUI. I was a young researcher representative and got to work closely with him on the academic and financial councils. His English remained comically poor (but was always better than my non-existent German), but we managed nevertheless to communicate sufficiently well to push through a series of measures which, collectively, ensured that researchers maintained their rightful place in the overall scheme of things. I remember him as a thoroughly decent and humane individual who was not afraid of siding with the researchers against his professorial colleagues if he felt that that was the best thing to do.

Your library is your portrait