The Royal Hunt of the Sun 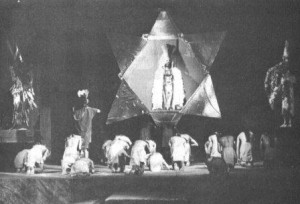 Today’s newspapers carried the obituaries of Desmond O’Donovan, a theatre director whose accomplishments included the 1964 premiere of Peter Shaffer’s extraordinary play The Royal Hunt of the Sun. That got me reminiscing. My secondary school, for reasons nobody understood, had an excellent stage (of West End standards, it was said). It also had, in Colin Tufnel, MBE (finally honoured in 2005 for his extraordinary work with generations of schoolchildren), a metal work teacher who was a great enthusiast of theatre and who, with great ingenuity and unstinting effort, produced several plays or musicals of very high quality every year. In my first year, 1968, he produced The Royal Hunt of the Sun (in other words, just four years after the premiere) and I appeared in the play, courtesy of quantities of greasepaint, as an Inca Indian. My older brother, a few years ahead of me, had played violin in the school’s 1967 production of The Pirates of Penzance, and that had been my introduction to the magical power of the theatre. But, oh!, the scene where Pizarro almost begs the strangled Atahualpa to prove that he was indeed the son of the sun king and to rise again – oh! I watched spellbound from the wings for four nights and I was hooked, totally hooked. Pizarro was played by Albert Welling, who, to nobody’s surprise, went on to enjoy a distinguished acting career. Atahualpa was played by Peter Herbert. I don’t know what happened to him but, through the wonders of the internet, you can read about that 1968 production in a copy of the school magazine here. In the picture I can just be made out, front of stage left, prostrate before Peter Herbert – I mean, the King of the Incas and the son of the Sun King!