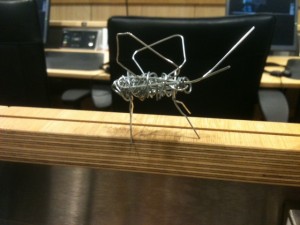 The European Economic and Social Committee’s primary decision-making body, the Bureau, met today to prepare this week’s plenary session and to engage in a number of political discussions. The Bureau meeting had been well prepared by the enlarged Presidency’s meeting in Stockholm a week ago and all went well. Beyond the preparatory work, other highlights included an exchange of views with Danish Ambassador Jonas Bering Liisberg, on the balance sheet of the outgoing Danish presidency of the Council of the European Union and proposals from the Secretary General (that’s me) for adjustments to the administration’s establishment plan. In the sociology of EU institutions, changes to establishment plans (more often referred to, using the French term, as ‘organigrammes’) are potentially fraught affairs. The big structural changes came in December 2008, just three months after I had started as SG. Today’s proposals were simply adjustments, particularly taking into account the current climate of austerity, but also the potential arising out of the Lisbon Treaty. Thus, taking advantage of a retirement, I proposed to do away with one of the two positions of Deputy SG (a rationalisation but also a budgetary saving) and to beef up the Committee’s prospective function. Happily, the proposals were, just like my December 2008 proposals, unanimously approved, which is just how it should be. Normally when I write a post about the Bureau I put, as an illustration, a picture of… a bureau. Today, for a change, I am posting a picture of an insect, fashioned out of paper clips by the President, Staffan Nilsson, as he also concentrated on the debates. I should add that I did the wings. Anorak that I am, I have a collection of such ‘doodles’, including many of Martin Bangemann’s expert yacht designs, ‘doodled’ during parliamentary debates. Both Staffan and I liked the insect, now immortalised on this blog!