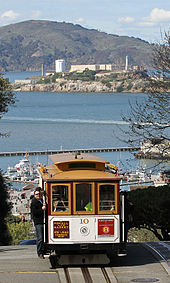 San Francisco’s cable cars are to the city what London’s trams and Routemaster buses used to be to it. You can jump on and off and stand outside and generally risk your life in a most enjoyable fashion, which is what lots of tourists do every day. Unlike London’s trams and buses they were saved from extinction by a determined campaign and, given that tourism is one of this picturesque city’s biggest industries, that decision was surely right. But the cable cars are also fascinating mechanisms and this morning we went to the Cable Car Museum which is the working base from which all of the cables in the three loops serving the city originate. The brakemen who drive the cars become very skillful. They have two levers; a brake and another lever that operates the degree of grip on the cable. They drive the cars in heavy traffic up and down steep hills with great aplomb. The museum explains the system and how it works very clearly. Thank goodness it survived! (My illustration coincidentally shows how close Alcatraz is to the city.)

Theme by Anders Noren — Up ↑