Another EESC plenary session week gets under way… 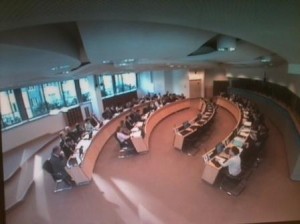 So; another Bureau and plenary session week gets under way at the European Economic and Social Committee, the last of the year. Once again, the machine moves smoothly into action (though there are always a series of preparatory meetings in the previous week). First, the management board in the early morning, then the ‘morning mass’, our pre-session meeting, where all colleagues involved in the organisation of the Bureau and plenary session attend to ensure proper coordination. (The picture is of a screen in the meeting room.) And then, in the afternoon, at political level, the enlarged Presidency met, and all of these were, as always, productive and consensual meetings. We’ll have Commission Vice-President Maros Sefcovic in the Bureau tomorrow and the plenary session will see debates on the Polish Presidency, the awarding of the EESC’s civil society prize and a debate and declaration on the crisis on the eve of the European Council meeting. Another busy and dense week!