A new visitors’ room for the consultative Committees 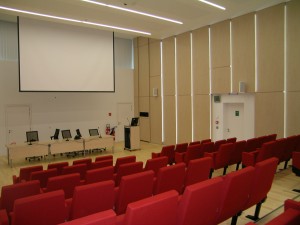 When the two consultative Committees, the European Economic and Social Committee and the Committee of the Regions, inherited their current buildings in 2004, they also inherited an old, delapidated building on the corner of rue Remorqueur and rue Belliard. This was pulled down and replaced by a new, attractively light and airy, office building. It was too small an area to build underground parking, and so the architects left a large underground basement space with no designated function. After discussions between the two administrations it was decided to turn the space into a room equipped for us to be able to receive visitors’ groups (growing each year in number) in more comfortable and better-appointed circumstances than had been the case until now (basically, administration meeting rooms with no natural light). Today, I visited the resulting new visitors’ room together with my Committee of the Regions counterpart, Gerhard Stahl. We are very satisfied. Although the space is largely underground, the architect’s use of light-stained beechwood and energy-efficient LED lighting  has created a bright and welcoming space that any university would be happy to have as a lecture theatre, I am sure. And all of this has been done on a very modest budget. Well done, our Logistics Directorate!

Your Europe, Your Say